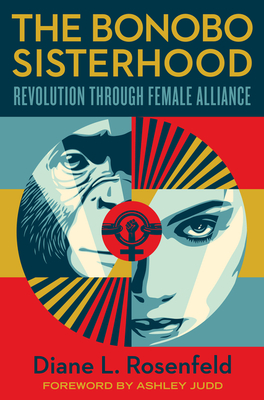 “Rosenfeld’s tour-de-force takes the power of female alliances to a higher level, giving us a road map for a new vision of women’s equality through the relationships and bonds we form among one another. The gift of this book is that it gives us hope.”—Valerie Jarrett, New York Times bestselling author of Finding My Voice, and former senior advisor to President Barack Obama

The Bonobo Sisterhood is a revolutionary call to action for women and their allies to protect one another from patriarchal violence. Internationally recognized legal expert Diane L. Rosenfeld introduces us to a groundbreaking new model of female solidarity; one that promises to thwart sexual coercion.

Urgent, timely, and original, The Bonobo Sisterhood harnesses the power of the #MeToo movement into a road map for sex equality in humans. Our closest evolutionary cousins, the bonobos have a unique social order in which the females protect one another from male aggression. The takeaway? Evolutionarily, bonobos have eliminated sexual coercion and enjoy a more peaceful, cooperative, and playful existence. We have much to learn from them.

Rosenfeld explores the implications of the bonobo model for human societies and systems of governance. How did law develop to elude women’s rights so consistently? What difference does it make that we live in a patriarchal democracy? And what do bonobos have to offer as living proof that patriarchy is not inevitable? Most important, how can women break down barriers among themselves to unleash their power as a unified force? Rosenfeld has answers.

The Bonobo Sisterhood takes us through real-life stories from the courtroom to the classroom and beyond, charting a new vision of a collective self-defense among women and their allies. It offers an action plan accessible to everyone immediately. This is an open invitation to anyone who wants to challenge the status quo. It starts with the power inherent in each of us knowing that we have selves worth defending, and awakening that power for ourselves and for our sisters. We now have a new model for real change, Rosenfeld reminds us. It’s time to use it.

The Bonobo Sisterhood forges a path to create and discover a new meaning of equality, liberty, and justice for all.

Diane L. Rosenfeld, JD, LLM, is a lecturer on law and the founding director of the Gender Vio­lence Program at Harvard Law School, where she has taught since 2004. Rosenfeld has appeared in major media outlets, including ABC’s Nightline; Deadline: Crime with Tamron Hall; Katie (with Katie Couric); CNN Headline News; Fox and Friends; the New York Times; the Washington Post; the Boston Globe; the Chi­cago Tribune; and NPR’s All Things Considered and Morning Edition. She is featured in the award winning documentaries The Hunting Ground; It Happened Here; and Rape Is . . . .

Rosenfeld served as the first senior counsel to the Office on Violence Against Women at the US Department of Justice and as an executive assistant attorney general in Illinois. She is the recipient of multiple awards for her teaching, mentoring, and change-making legal policy work.

She lives outside Boston with her husband and their dog.

“Rosenfeld’s tour-de-force takes the power of female alliances to a higher level, giving us a road map for a new vision of women’s equality through the relationships and bonds we form among one another. The gift of this book is that it gives us hope.”  — Valerie Jarrett, New York Times bestselling author of Finding My Voice, and former senior advisor to President Barack Obama

“On the Harvard campus, Diane is known by many names: Harvard Law Lecturer, angel, bonobo. In the darkest hours after a rape, survivors learn from a whisper network about an angel of the law. That angel is Diane. I know because I was one of the Harvard rape survivors who found hope and help from Diane. This book describes that network, affectionately called by Diane, The Bonobo Sisterhood. It is a sisterhood to whom I owe my justice, success, and healing today.”  — Amanda Nguyen, founder of Rise and 2022 TIME Woman of the Year

“With The Bonobo Sisterhood, everyone—including the men she invites in as allies—can get a taste of Rosenfeld’s signature fusion of passionate advocacy for survivors along with an activist-scholar’s command of legal theory and practice. This book should be widely read by anyone who is rightly tired of the status quo and wants both revolutionary insight and practical suggestions for change.”  — Jackson Katz, PhD, author of The Macho Paradox: Why Some Men Hurt Women and How All Men Can Help

“The Bonobo Sisterhood shows us that the way to disrupt patriarchy is by demonstrating that safety, security, and strength can exist among women—an idea that is both simple and radical all at once. When we strengthen our bonds with one another, rather than relying on the unstable promise of protection under patriarchy, a whole new direction is possible, and, indeed, better for all.”  — Fatima Goss Graves, president and CEO of the National Women’s Law Center and cofounder of the TIME’S UP Legal Defense Fund

“Rosenfeld’s gripping indictment of the inadequacy of society’s responses to sexual violence makes her call for a social and legal awakening urgent and persuasive. The Bonobo Sisterhood suggests how the world really can become less patriarchal.”  — Richard Wrangham, author of The Goodness Paradox: The Strange Relationship Between Virtue and Violence in Human Evolution, and Ruth B. Moore Professor of Biological Anthropology at Harvard University

“An innovative analysis of the legal and social structures that enable gender-based violence and how to overcome them. Rosenfeld builds a persuasive case.” — Publishers Weekly