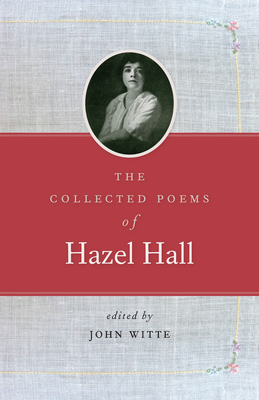 On the 100th anniversary of her debut poetry collection, Curtains, first published in 1920, Hazel Hall’s reputation as a major Oregon poet endures. During her short career, she became one of the West’s outstanding literary figures, a poet whose fierce, crystalline verse was frequently compared with that of Emily Dickinson. Her three books, published to critical acclaim in the 1920s, are reissued here in paperback for the first time. Together, they reintroduce an immediate and intensely honest voice, one that speaks to us with an edgy modernity.

Confined to a wheelchair since childhood, Hall viewed life from the window of an upper room in her family’s house in Portland, Oregon. To better observe passersby on the sidewalk, she positioned a small mirror on her windowsill. Hall was an accomplished seamstress; her fine needlework helped to support the family and provided a vivid body of imagery for her precisely crafted, often gorgeously embellished poems.

Hall’s writings convey the dark undertones of the lives of working women in the early twentieth century, while bringing into focus her own private, reclusive life—her limited mobility, her isolation and loneliness, her gifts with needlework and words. In his updated introduction to this volume, John Witte examines Hall’s brief and brilliant career and highlights her remarkably modern sensibilities. In a new afterword, Anita Helle considers Hall’s work in an era when modes of literary historical recovery have been widened and expanded—and what that means in the afterlife of Hazel Hall.

Hazel Hall was born in St. Paul, Minnesota, in 1886. She was the author of three books of poetry: Curtains, Walkers, and the posthumous Cry of Time. She died in Portland in 1924 at the age of thirty-eight.

John Witte is a widely published poet, a teacher, and the former editor of Northwest Review. His most recent book is Disquiet. He lives in Eugene, Oregon.

Anita Helle is Professor of English in the School of Writing, Literature, and Film at Oregon State University.  She has served as poetry editor for American Literary Scholarship and is the author of The Unraveling Archive: Essays on Sylvia Plath.