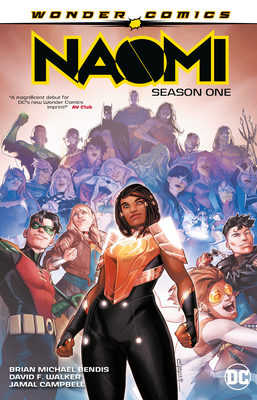 The Eisner Award Nominee for Best Limited Series, Naomi, begins a unique quest for self-discovery when a fight between Superman and Mongul crashes into Naomi's small northwestern town. Follow Naomi on her journey as she discovers her significant origins.

A local teenager named Naomi starts looking into what happened the last time a super-being visited her hometown--and how that visit might tie into her own origins as an adopted child. But Naomi's seemingly harmless curiosity exposes more than just her family's startling secrets--it attracts the attention of forces that could threaten the Earth itself!

Learning the truth about her heritage will turn Naomi's life upside down. Can she learn to control her uncanny new abilities and come to terms with her strange new place in the world before it's too late?

Brian Michael Bendis is an award-winning comics creator, New York Times bestseller and one of the most successful writers working in mainstream comics. In his twenty years at Marvel Comics, he produced some of the greatest graphic novels the publisher has ever seen, including Daredevil, Ultimate Spider-Man, New Avengers, House of M, Secret Invasion, Avengers: Age of Ultron, Alias, All-New X-Men, Uncanny X-Men, Iron Man, Guardians of The Galaxy and many more. Bendis is also known for his creator-owned works, including Powers, Scarlet, Brilliant, Goldfish, Fire, Jinx and Torso. He lives in Portland, Oregon with his family.